When there are assignments – yes, that’s the word – trajectories commissioning the laborious application of signs – I resemble a young school-age girl white-bloused and checkered-skirted skipping little curlicues down a sunlit autumn sidewalk.  Either in performance or avoidance of what demands to be done.  Activity testifies to play.  The weight of the backpack keeps the frolic tethered to the ground.

Geometrically you could geo-graph-ically map the carefree trail, which would end up looking quite a bit like the path of Woodstock’s flight (extended)

[how I investigate world]

Relieved of positive burden – reputation, obligation, guilt, shame, agreement – anywise some sort of internal enforcer relating to the external world – is as if Schulz erased the yellow birdy’s gravitation.  The backpack become balloon with the force of hot air but random like helium – set free of a hand and willy-nilly flitting to loss in midwesternly wind-raked sky.

Mine is more of a breach or a gap in the hedge – squares of deconstructed sidewalk without boards.

Collapsing toward me in slow-motion imminence are towers of books and billings, due dates and mouths to feed, souls to placate or nourish…rebar extending in its warped way out of the soil behind me – projects halfway done, future commitments previously agreed, promissory plans enacted for stabilizing measures.  Even now I hear the dogs barking outside, wanting in.  But the knot of rubber and tie of string are so easily undone…like mowers accidentally thud-chopping coiled garden hose that lay mimicking the hoppity school-girl’s jaunting…and all drifts off and away, falling through space, spinning in time – neither up nor down nor to or fro – simply set free  / total loss – momentary or not: unknown –  vacuous absence – somehow unmoored.

It was never difficult to see the way, it’s the getting there that problems.  The paths unique to our movements.  We tend to think it’s the setting out – that getting going  presents the obstacle – but we’re always going somewhere.  The millions of streets and alleys, those are what throw us, what keep us from the end.  How do we know, in constant diversion?  Oh I see a way, but not the destination.  I’ll move as I see fit.  As will you.

Consider, then choose.  But always keep moving.  There’s no other way.  Keep your eye on the opening.

So I’ve struggled a bit the past week or so with a plethora of projects: personal, family, parenting, school, commission work… mostly good things, deep rewarding things, and yet leaving me with a feeling that I have had very little time to simply create.  My wife challenges me often with the categories I concoct for myself between art and life, relation and solace, pleasure and responsibility, and by and large I agree that an artist’s life, a creative life, is a creative life, not a creative this-or-that, segregated activity.  And yet, nothing quite compares to a blank page not full of pre-existing questions or directions; an impulse externally unnecessary; a mark or word uncalled for.  It sometimes helps to think of things as stages, the “for now” syndrome that hope parasites.  But ultimately, I don’t quite feel “okay,” or balanced, somehow settled in my world, until time is available to sit at my desk, in my chosen or gathered surroundings, undirected but by what might rise from within.  Today I have plugged away seven hours or more at schoolwork, and granted myself an hour swept clear of such things.  The piece below is the result (click title or picture for text) 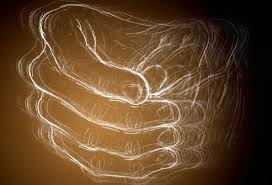