What I was composing the other day in my head, or wherever daydreaming occurs: filling up that gap between inside or outside, idea and actual, etcetera.  They told me not to worry about losing it – that it would return, re-emerge.  I lost it.  The idea, sensation, form, content – everything.  Well, not everything, exactly, I guess, because how could I conjure that there was something, some experience, some initiative or other, had I truthfully lost it?  Okay, maybe they’re right, and “everything” is a question of access.

In any case, well, no – in present case or tense or whatever now-situation might be (“Weather”? – see Roland Barthes, The Preparation of the Novel, or Tim Ingold’s essay in Vital Beauty) I am not experiencing “access” to something some part or parts of me (some connectivities) believe or invent a past tense for – a disjunction/abstraction/detachment from.  A difference.

I am believing that I felt differently about something at some other time, that language was forming out of me relating to that affect, and that I had the potential capacity to express all that semiotically – or, in a way that it might make sense, be shared, exist.

Now I’m languaging nothing.  Or, not exactly nothing, more like a different something that in fact is the semiosis of another inexpressible or inaccessible possible something.  Which means, potentially, anyone could find it, discover/uncover/invent/compose/co-construct (co- probably redundant to con- but then I’m not Russian, at least not currently) that initiative and perhaps I’d re-cognize or re-member whatever realigned threads rewove into this particular weaving (what is “now”).

Etcetera.  This is how it goes down for me (current context taken mostly for granted).

“Is it possible to make a Narrative (a Novel) out of the Present?  How to reconcile – dialecticize – the distance implied by the enunciation of writing and the proximity, the transportation of the present experienced as it happens?  (The present is what adheres, as if your eyes were glued to a mirror).  Present: to have your eyes glued to the page; how to write at length, fluently (in a fluent, flowing, fluid manner) with one eye on the page and the other on ‘what’s happening to me?'”

“The novelistic ‘drive’ (the love of the material) is not directed toward my past.  It’s not that I don’t like my past; it’s rather that I don’t like the past (perhaps because it rends the heart), and my resistance takes the form of the mist i spoke of – a kind of general resistance to rehearsing, to narrating what will never happen again (the dreaming, the cruising, the life of the past).  The affective link is with the present, my present, in its affective, relational, intellectual dimensions = the material I’m hoping for (cf. ‘to depict whom I love’).”

“This is actually to go back to that simple and ultimately uncompromising idea that ‘literature’ (because, when it comes down to it, my project is ‘literary’) is always made out of ‘life.’  My problem is that I don’t think I can access my past life; it’s in the mist, meaning that its intensity (without which there is no writing) is weak.  What is intense is the life of the present, structurally mixed (there’s my basic idea) with the desire to write it.  The ‘Preparation’ of the Novel therefore refers to the capturing of this parallel text, the text of ‘contemporary,’ concomitant life.”

“Now, although at first glance making a novel out of present life looks difficult to me, it would be wrong to say that you can’t make writing out of the Present.  You can write the Present by noting it – as it ‘happens’ upon you or under you (under your eyes, your ears) – In this way, we at last come in sight of the double problem, the key to which organizes the Novel – on the one hand, Notation, the practice of ‘noting’: notatio.  On what level is it situated?  The level of ‘reality’ (what to choose), the level of the ‘saying’ (what’s the form, what’s the product of Notatio)?  What does this practice involve in terms of meaning, time, the instant, the act of saying?  Notatio instantly appears at the problematic intersection between a river of language, of uninterrupted language – life, both a continuous, ongoing, sequenced text and a layered text, a histology of cut-up texts, a palimpsest – and a sacred gesture: to mark life (to isolate: sacrifice, scapegoat, etc.)”

woke up with this fed from memory… 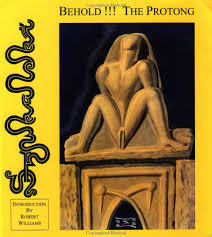 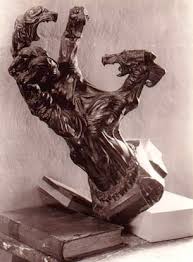 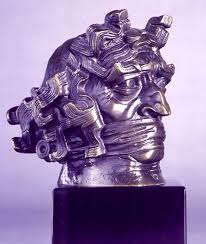 The zany mind of Stanislaw Szukalski

Leonhardt Conspiguous would have known the difference.  Between, say, BWV 161 and BWV 173; or a trunk or tail if he’d been born a blind mouse.  LC always knew the differences.  But he found similarities difficult to trace.

In conversation Leonhardt once encountered a man who’d read the entirety of his library, (the titles so resembling his own as to appear indistinguishable), drawing the same conclusions as LC in the shared vocabulary.  LC was unable to devise a category or designation for this phenomenon.  It was like looking in Leona’s eyes.

A concave lens forms a sphere of reflection, and hers – of grey of green of blue – mimicked Leonhardt’s so completely both in color and tone, that he’d instantly felt something farther back, back behind, any place he’d ever felt before.  In himself or another.  As time went on and her desire gained in details – their fancies so colluded he could not decipher whose were which – not in content nor expression.  The similarities baffled him.  And frightened.

But Hunter Green from Forest?  LC would know even the percentages and numbers.  Like every kind of sparrow, every human’s skin.

Leonhardt believed that what we come to know is inherently unique, but that same is imperceptible.  What startles us in those with whom we feel alike, is not the magnitude of what we hold in common, but how specifically each possesses it.  “To see eye to eye,” in Leona’s case, made visceral sense to him, but could not be understood.  “To see in or around” is what he labeled “comprehension.”

LC could see no further “in” to his cherished love Leona, than he could see within himself.  Which to some seemed deftly nuanced and unusually deep, but that was due to fierce attention and lots of time and mass filigrees of distinctions, not, Leonhardt insisted, to understanding.  “To analyze parts and fragments, was not to know a whole,” he was fond of telling himself, “and our lives are composed of fragments.”  Like arranging jigsaw pieces, separating by color and cut and number, and believing that they might fit, still never solved a puzzle, where new pieces are added all the while.

LC believed there was no whole, as far as humans perceived, just incalculable myriads of pieces arranged, rearranged, created/forgotten, damaged or lost in their fires.

He could never explain Leona.  Or synchronicity.  “Terms such as these synonym mystery,” he would say, “and should be kept in careful silence.”

LC despised religion.  The compulsion of the concocting of names, he called it.  A disease, an impatience, an anxiety of what is unknown.  Shuffling a hat full of vowels and consonants we look for what sounds as strange as our experience and assign it that – that which is odd to our senses, things we describe can’t explain.  A crapshoot or fancy, an oracle of chance.  Presuppositions he heartily derided.

We were left with description, he thought.  Of Leonard (his friend of shared library and thought) LC reported the odd sensation of someone other speaking words that more nearly matched one’s own ideas than the terms oneself could find.  And Leona, well, Leona.  Leonhardt preferred to call her by her body parts or textures, her language or beliefs, “Leona” ringing to him of the mystically unexplained, uncomfortable talisman, as if he were mumbling “YHWH” or “Zeus,” “Santa” or “Satan” or “Venus.”

(to be continued?  you decide…)