“Language discovers what one might know, which in turn is always less than what language might say.

We encounter some limitations of this relationship early, as children.  Anything with limits can be imagined (correctly or incorrectly) as an object, by analogy with other objects – balls and rivers.  Children objectify language when they render it their plaything, in jokes, puns, and riddles, or in glossolaliac chants and rhymes.

They discover the words are not equal to the world, that a blur of displacement, a type of parallax, exists in the relation between things (events, ideas, objects) and the words for them – a displacement producing a gap.

Because we have language we find ourselves in a special and peculiar relationship to the objects, events, and situations which constitute what we imagine of the world.

Language generates its own characteristics in the human psychological and spiritual conditions.

Indeed, it nearly is our psychological condition.

This psychology is generated by the struggle between language and that which it claims to depict or express, by our overwhelming experience of the vastness and uncertainty of the world, and by what often seems to be the inadequacy of the imagination that longs to know it –

Language is one of the principal forms our curiosity takes.

It makes us restless.

As Francis Ponge puts it, ‘Man is a curious body whose center of gravity is not in himself.’

Instead that center of gravity seems to be located in language, by virtue of which we negotiate our mentalities and the world; off-balance, heavy at the mouth, we are pulled forward.

Language itself is never in a state of rest.

The ‘rage to know’ is one expression of the restlessness engendered by language.  ‘As long as man keeps hearing words / He’s sure that there’s a meaning somewhere,’ as Mephistopheles points out in Goethe’s Faust…”

–Lyn Hejinian, The Language of Inquiry– 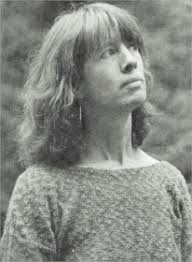 6 thoughts on “Masterful Hejinian on Language”