About how little I care – re: ideas – the freedom of impersonal investment – when a piece is duly fictional.

After the days spent composing Signs of Love I’ve only thought of how I haven’t thought of it since it was posted.  Johnson’s theory of perception, the professor’s thoughts and ideas, Monte or Margaret, Frank or Lars – how they none of them reflect on me.  How I didn’t have to worry how they came across or sounded, what positions or actions they became – what they represented – it wasn’t me!  Who does battle with a shadow?

So often, the stringy stream of conception-reflection-creation-manifestation seems to pull heavy parts of the self along with it.  Dark or slimy residue.  As if a reader who took issue, questioned or challenged a something that I wrote or language I expressed as fiction were in fact addressing some aspect of ME – rather than an open work of invented text.  Suppose, for instance, my wife reads a piece and follows it up with “so you’re saying that life is more difficult because of me?!” or a random visitor commented “how could you think or say this?!”  When in fact, of course, I didn’t – Lorraine did, or the professor or husband, writer or sand crab or whomever the character that acted or expressed it did.  Ask them then?  Another way of saying – “ask yourself.”   That’s what I as a writer continually have to do.  Language comes out, forms an idea, or a behavior is described and I have to wonder at it – is that indeed what the voicing thinks or wants or does?

Like a painter with their lines and colors, textures and strokes: what belongs once something has been marked there?

The freedoms of fiction spread as I recognized the therapy-like patience and reflection I provide to characters and voices – to language – in texts (fiction or non-fiction).  I do not feel threatened by them, do not take them personally, neither when I read nor write them.  They are other – other matter, other contexts, other contents, other kind from me.  I am busy handling matter…piecing it together, painting over, scraping away, diluting, splattering, letting it run…open to what “feels” or “sounds” right given the matter at hand – content, tools and resources.  Strenuously engaged, passionately even (at times), and also separate, observant, addressed as much by the work as it forms as addressing it onto the page. 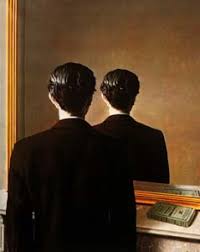 Which got me to thinking – how much kinder might I be, even towards my “self” were I to engage what creates me as “other”?  We’re an oddly organized confabulation of matter and energy, after all, multiple diverse systems coordinate and constitutive, creative and adaptive toward a sort of dynamic organismic “whole.”  My brain no more a “me” than my penis or big toe.  How often with sharp pain in my knee or some zany daydream, a nail needing trimmed or hair left in a brush, do I question, challenge or take issue with a personal self for such systemic occurrence?  I participate with, or have (am characterized by) knees and eyes and organs, but they do not equal me.

What if some kind of “I” (collective of natural dynamic and organic systems) listened to, read, inquired and engaged the contents, emotions, concepts, actions and instincts that occurred within as fictions engaged – as benign or indeterminate others – akin to characters or words in a story or play – organized matter with energy – rather than some sort of judgmental scrutiny so often readily applied to “Me”?

The “I,” the “me,” the “self,” the “brain,” the “calf,” the organs, veins, chemicals, liquids, cords and tendons, bones and tissues, the individual cells of me – all inter-relational organisms in themselves involved in a system I experience as “me.”  With recognition, suspended disbelief, detachment, passion and care granted as I offer my own and others manifest creations in language or image, movement or sound?

Attend to your cells and systems as characters and languages today – manifestations of being – not entirely your”self” – welcome all the others inside as well.