– Edmond Jabes, “A Foreigner Carrying in the Crook of His Arm a Tiny Book”

“Dasein means: being held out into the nothing”

– Peter Sloterdijk, “The Art of Philosophy”

“Even when nothing / replaced the gifts, it was a kind of seeing”

I was driving in the dust of this planet while wondering how I knew the sky was not inside me.

After all, there are theories.

But my words do not have “the brilliance of stars.”

Hugo Mercier & Dan Sperber concocted The Enigma of Reason… and I want to say …of Reasons.

After all (i.e. “in the beginning”), where we set out from seems to be an enigma of reasons.  The proffering of theories (the art? of fabricating reasons?).  The urgency to describe or define, explicate or explain, ‘make sense’ of things like her glance, or my illness; the weather, or wear (time), something felt or imagined, desired.  Each engendering theories.

We call that engendering the imagination.  Using language and sensing, others and other, an-experience-in-the-world to … give reasons.  And why?

Haven’t we begun everywhere?  With urges and instincts, desire and relation, observation and interpretation, and so on… and yet it’s only ever ‘mine’ or ‘ours,’ – a giving of reasons and investigation that is human – no, not quite.  Not even that.

We incorporate ‘earth’ in it.  And many things nobody owns or created.  Language and sense, and earthy-othery tools: microscopes, telescopes, instruments, numerals, metals and plastics and paper.  Electricities.  Motion.

Anything to wrap ourselves in and around… and give reasons.

That experiencing: when one aches for a knot or a kernel, a key or a gem.

Mine might be the Texts for Nothing.  A nothing I never can reach (and I knew it).  Don’t we all begin once we discover we can’t?  After it’s all already begun?  In the midst of?

Mystic-scientists propose an only-what.  Eschew reasons.  The lock of the rational derive.  Sense or no, this is what we observe in conditions.  Phenomenology.  The human (“observer”) limited experiencing.  Only that.  Being-there.

But the tekne collaborates and alters.  There never is only.

I pursue nothing because I know I can’t find it.  Will not find it until I am not.

So I err at desire.

A longing for order?  For sense transcribed into reason?  For nothing to give rise to all and these everythings to foment continuing?

But we know don’t we?  Deeper down, without bottom?  Don’t we know we’re a tiniest book?  Carried in the arm of a world-without-end?  Of further reaches?

We don’t know.  We make ‘knowing’ or ‘knowledge’ – a description – a typification (a logic, a rationality, i.e. a reason, a theory).  Floating in infinite perhaps.

They say we share common elements we’ve devised observationally.  So the sky might be inside of me.  But words aren’t stars, are they?  Theories.  Experience.  Ours.

We’ve come to experience not-knowing as a kind of ‘humility’, ‘valor’, and ‘honesty.’  But why?  We don’t know.  If that’s so, we can’t know we don’t know.  And life is a loop of inquiry, perception… that leads to the giving of reasons and the making of sense.  Beginning ourselves from began.

Things ‘ring true,’ resonate, and we follow… on… seeking reasons, making sense (where there is none?).

Posit ‘God.’  Posit ‘Method.’ And we’re caught in the crevice of crafting for reasons.

“Even when nothing / replaced the gifts, it was a kind of seeing.”

he who already knows cannot go beyond a known horizon

In a bout of acute loneliness (a sharp pang of alone signifying a sort of paralysis – some definite inability, however temporary, to start oneself up by or with oneself) I reached out to Hannah.

For some of you, the term Hannah will conjure connotations and resonances, perhaps emotions or concerns, discomforts, even though she does not exist.

Or I loaded the film Satantango by Bela Tarr & Laszlo Krasznahorkai.

A start-up, a stimulus, a searching.

Actually I wrote the name Hannah, or Hollie or Holly or Hallie or Halley or Bela or Chris or Maurice Blanchot.

To be lonely and to reach out.

A drink then, for interaction.

A scribble on a page.

In a bout of acute loneliness I penned a letter to Herman Melville.

I wrote words onto a lined page.

I made an ‘other’ and called her, Hannah.

Or Meagan or Meghann, Angie or Angela or Angelo.  Gilles or Jill.  Jean and Jan and Jen.

I reach out.  I almost full fill.  Another notebook.  A drink.  A smoke.  A page marked and turned.

I do not know what loneliness is.

Perhaps it is nothing, or nothingness.  Perhaps frustrated desire.  For – ?  What is not (isn’t that what defines desires?).  The missing, the absence, the unknown.

I called it Hannah.

Hell or Helen or Helene/Helena.

No one knows but the name that works best.  Christy or Christina.  Vernoica/Veronique.

A drink to an other (to signify might be).  A smoke for the presencing.  Another word, another name for something.  Out there = O ther.  Elves of else.

The book’s called Nothing Matters: a book about nothing, because “that nothing becomes the quest, which in turns begets something” (Ornan Rotem).

I do not know what it is to be alone, and my loneliness is painfully acute.

This is my correspondence with nothing.

The blue river is gray at morning

and evening.  There is twilight

at dawn and dusk.  I lie in the dark

wondering if this quiet in me now

is a beginning or an end.

Ah, you three women whom I have loved in this

long life, along with the few others.

And the four I may have loved, or stopped short

of loving.  I wander through these woods

making songs of you.  Some of regret, some

of longing, and a terrible one of death.

and hearts in me.  The shameful ardor

and the shameless intimacy, the secret kinds

of happiness and the walled-up childhoods.

I carol loudly of you among trees emptied

of winter and rejoice quietly in summer.

A score of women if you count love both large

and small, real ones that were brief

and those that lasted.  Gentle love and some

What is left is what’s alive in me.  The failing

of your beauty and its remaining.

that makes your music in each wind that moves.

A music composed of what you have forgotten.

That will end with my ending.

The train’s stopping wakes me.

Weeds in the gully are white

with the year’s first snow.

I feel around in myself

to see if I mind.  Maybe

I am lonely.  It is hard

to know.  It could be

To Know the Invisible

The Americans tried and tried to see

the invisible Indians in the deeper jungle

of Brazil.  They waited for months,

maybe for years.  Until a knife and a pot

disappeared.  They put out other things

and some of those vanished.  Then one morning

there was a jungle offering sitting on the ground.

Gradually they began to know the invisible

by the jungle’s choices.  Even when nothing

replaced the gifts, it was a kind of seeing.

Like the woman you camp outside of, at the five portals.

Attending the conduits that tunnel from the apparatus

down to the capital of her.  Through the body

and its weather, to the mind and heart, to the spirit

beyond.  To the mystery.  And gradually to the ghosts

coming and leaving.  To the difference between

which is not a nightingale.  Getting lost in the treachery

of language, waylaid by the rain dancing its pavane

in the bruised light of winter afternoons.

By the flesh, luminous and transparent in the silent

clearing of her.  Love as two spirits flickering

at the edge of meeting.  An apartment on the third

floor without an elevator, white walls and almost

anyone’s ability to cope with.  The way love is after fifty.

– Jack Gilbert, The Dance Most of All 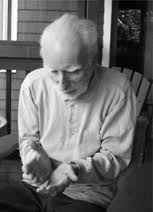 Love is apart from all things.
Desire and excitement are nothing beside it.
It is not the body that finds love.
What leads us there is the body.
What is not love provokes it.
What is not love quenches it.
Love lays hold of everything we know.
The passions which are called love
also change everything to a newness
at first. Passion is clearly the path
but does not bring us to love.
It opens the castle of our spirit
so that we might find the love which is
a mystery hidden there.
Love is one of many great fires.
Passion is a fire made of many woods,
each of which gives off its special odor
so we can know the many kinds
that are not love. Passion is the paper
and twigs that kindle the flames
but cannot sustain them. Desire perishes
because it tries to be love.
Love is eaten away by appetite.
Love does not last, but it is different
from the passions that do not last.
Love lasts by not lasting.
Isaiah said each man walks in his own fire
for his sins. Love allows us to walk
in the sweet music of our particular heart.