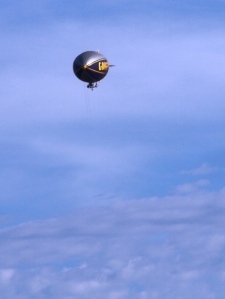 And what was there to do?

High school now behind us, Frank’s dad dead, and no promise of college, work, or love; we were lost, angry, confused.

We’d all of us read Pynchon, we knew very well what to expect, and it wasn’t good.

And lots of it.

So much burned inside us.

At the city’s River Festival we spotted the blimp.

And somehow we knew.

“Arthur Schopenhauer wrote that dreaming and wakefulness are the pages of a single book, and that to read them in order is to live, and to leaf through them at random, to dream.  Paintings within paintings and books that branch into other books help us sense this oneness”

Life is, but a dream

is also life.  Like a string of letters fitting an experience is also an experience itself.  A person’s body, in other words.  Things are inseverable, she said.

I notice it in the colors of the sunset, when I think of it in terms of color rather than it being its own name.  Which might also be a word for color, each time.

It would seem (abstractedly) to give us much to think about, but that would be on to something else.  Which we also name “distraction,” which, of course, is not what that’s about.  Dis-traction, abs-traction, con-traction, at-traction = they’re all our traction with the world, with what’s other, defamiliar, including, of course, our selves.

Nothing is recursive but thinking makes it so.  “I am talking about paradigms,” he said, instituting one in the speaking.

What it all means.  Exactly.

The sunsetting, the dreaming, the thinking, unpatternable patterning, the life.  “One should always say living,” they say.  Says who?

On what I’m seeking to analyze – synonym (I suspect) – “to digest,” in other words I am performing a series of actions, some bodily progression (process-ion?) here to here to here.  Never getting anywhere else, but altering it, all the same.

The “men of action” we all are (without doubt including women and children – historical music of lines, still).

but a dream is also living was what I’d set out to say with no chance of expressing any one thought without having already moved along, here, living, same different thing.

The unlikelihood of the same (EXACT) dream, or a fitness to a paradigm-dictionary, abstraction of types or categories…its own dreaming action, so to speak.

Here, here, do not give up hope of the real, it’s another possibility, though we do not understand it, dreaming it as we do, living.  As we do, people of action.