How Does the Artist See

of my loving her

and bites at every bending

chained as it is

to my enormous hoary head

so that I face in all directions

Another failure…I nearly doubled the word count ’cause he wouldn’t shut up.  Probably shoulda aborted it, but here it is:

He was painting a picture for us.  “Now this takes significant time to develop,” he said, “but I promise it’ll be worth the wait.”  “The fruits, they aren’t easy pickings, but if you’re willing to work it, I mean really get in there and give it a go – you’ll find ‘em, and they,” he assured us, “even these beautiful berries, nuggets, sweet bloody fleshes can seem prickly and tart at the first – it’s kind of an ‘acquired taste’ as they say – from years and years of this trying/acquiring and trying/acquiring – but those tiny pert jewels, held deep ‘round the heart of its center, those phenomenal pearls of good juice, as they finally give way and pop open,” he said, “that rush!  That momentary flood of powerful delight, that untangleable blend of most delicate morsel and sun-bittered time, that salting of aging and ripeness – it’s a wonder!”  “You’ve just got to get to them and find them, one after one and by one, have persistence!” he admonished, “far along, deep within, there’s always this unbelievable cluster of most amazing, unique and mouthwatering reward – yes, it seems tiny and ephemeral and difficult to grow or achieve, but it’s worth it!” he encouraged us, “the dedication of labor and time, constant tending and pruning pursuit; the right balance of trimming and rest, nourishment and fallow…”

Why he’d referred to our marriage as “the Brambles.”

Please join us in these weekly forays! 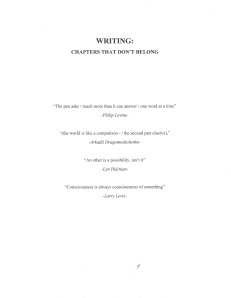 “’Appearances / remain suspended / in transmission’ (Craig Watson) are not so much perceived as apprehended, handled; the one affecting, infecting, the next”

Or something to hold what dies off.  The reverberations without resonance.  All edited, edited out, according to needs for appearance, depending on what apprehends, the shape of the handler’s snare.

Think of it – what is selected for capture, in captivity, infects, slipping frequencies to drift on, transmitting, transmitting, there is always ash that won’t be removed, no amount of soaking, scrubbing or spray…

perhaps it’s under the nails, clogging the pores, dusting the follicles… the remains.

We don’t know why we write, trusting such ephemeral weightless shifty particles to catch as motes in an eye…appearances, like dust (in just the right angle of light), remaining suspended in their transmission…hoping (without, really, hope) to, in apprehension – apprehend, by being handled to affect, infect…

always wanting next.  Making it so.

Why the book is needed (as ashtray) as form to hold the crumbling, an urn for the remains, until such time as they might be stirred or shaken or spilled.

Again in the commerce of bodies, handled, brushed and staining.

It gets everywhere.  And remains.

Language, whether structures/systems of, or fragments – bits and pieces, lying everywhere implicit.

To write – to make explicit?  It asks more than it answers, word by word, by letter, by ash…

waiting to be breathed…