Ah, “the perpetually changing, muddied, maid-of-all-work, our common language…a public instrument, a collection of traditional and irrational terms and rules, fantastically created and transformed, fantastically codified, heard and uttered in many different ways” 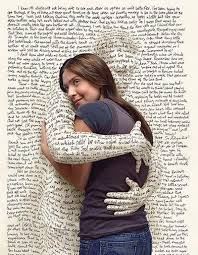 Summarization often feels inherently erroneous.  Much as I have an insatiable passion for “figuring things out,” for the observable “hows” and “whats” of scientific inquiries and theory, much as it evokes a delight of fascination and sense of knowledge or understanding to learn of the makeup and behaviors of neurons or cells, cerebellums or furry beasts, none of it ever feels comprehensive or resolving.  The human, to me, is some paradoxical wonder of natural capacities and probabilities and dynamics and flexibility that can endlessly occupy and consume us.  Like any part of the cosmic system, from quarks (or smaller?) to global social and environmental systems.  Language has long served as a place of experiment and observation for me of just such probability- and convention-governed behavior coupled with a kind of infinite openness and flexibility.  I believe this is one of the reasons I’m so drawn to working in words as a medium.  But listening to other artists it is easy to see that oils, wax, clay, plastic, etc. also have these inherent qualities.  Dance.  Music.  Craft.  Parenting.  Romantic loves.  Friendships.  Relations.  Essentially, relations.

A primary personal pleasure for me is delving into theories.  Semiotics, linguistics, neurobiology, aesthetics, philosophy, information systems, communications, psychology and the like – all provide  me rich excitement and spell-bound, breathless appetites and anticipations.  The process of learning and becoming – interacting with world, others, ideas, stuff – it is what makes me tick in realms of gladness.  This past week I’ve burrowed down into the work of Max Black and related source documents, particularly Wittgenstein.  I wanted to share some of Black’s “summarizations” because they retain the mess and complexity of what he is observing in a way that feels authentic.  For those of you who share the interests…the following derive from Max Black’s The Labyrinth of Language.

“The extraordinarily ramified network of skills, habits, actions, conventions, understandings, which we bundle together under the label of ‘language’ is too complex to admit of any simple summary…”

“For all its fixity of structure at any given time, a living language has an inherent plasticity and capacity for growth and adaptation (it is more like a developing organism than an inflexible machine).”

so instead of definition, Black offers what he calls a “landing stage” for directing our attention to certain features of language…including the following:

Language is rooted in speech

Language is directed, reversible and self-regulating

Language is an institution (always part of a speech-community, a participatory action)

Language is meaningful (expressive and evocative)

so I offer these reflections today as a celebration of the magnificent medium we all of us are using to some extent throughout all of our lives and activities – ah language – ah “open systems” – ah humans – ah world!

6 thoughts on “In love with language”