We dress ourselves in certain clothes, change our hair and faces in order to look some way we think to look.  Appearance changes us and it need not be dissembling.  Indeed, what are we?  Are we anything?  Sometimes, we become what we look to be which we have thought to be.  And, on further thought, this may be nothing also though, for the time, it looked to be something.  Other times, our dissembling seems wrong in its particular, as a contradiction of another identity as though we had that identity and an assumed one could contradict it.  We want to be something: whatever we really are, whatever we could hope to be.  But, ‘What we really are is a mystery, and what we could hope to be has only such value as our hope assigned it.  Our aspirations are blind and arbitrary and their success is only their own.

Children dress in scraps of costume and play at being what the scraps suggest.  They try it and let it go.  Later, our commitments are sometimes fuller and the letting go isn’t so easy when our interest wanes as it may.  We hedge it with other interests on the side, secret selves or contradictory clothes which protest the real me, so that anyone’s person may well be multiple and all the multiples tentative and exploratory as children’s are.  The space remaining for definition – so wide for children, or so it seems – becomes narrow and limited and definition farther and farther off and we accept what we were as if it were what we are or even what we had meant to be.  But it isn’t.  We know so.

When we ask who someone is we get places and ages for answers, occupations and antecedents, what times and places someone has occupied or what other external has occupied them, as though we were all blanks and had no shape or nature except by possession.  Our need to possess and our need to be possessed proclaims this.  If we really were something in ourselves, could we need anything?  Could anything possess us?  Possessions hardly satisfy us.  They must have been not our need.

But, whatever our need, they must in some sense have been wrong and we sense the wrong not by contrast with some other possession though it must often seem so: the apparent greenness of other pastures or even this same pasture in the approach of some spring.  We have hopes for projected futures, for what may someday be in spite of all.  In spite of all.  In the light of all.  How impressive the all is: the endless possibilities whose indefinite endlessness makes absurd any one.  How hopeless it is to pose in any particular costume when all we are is limitless and costume denies that, limits us in a role.

What can we ever be if the limitlessness of the all is truly our quality?  We can as little be anything as we could if we were nothing as also it seems we are.  It is hard to decide; and the decision whether we are all or nothing, based as it is on the same premise, produces the same result; we cannot ever be anything.  Though we dress however forcefully or fancifully we will, it is always pretension though the pretense may have its successes, even for a long time.

What of the world?  Though there may seem to be nothing outside ourselves, there is a sense in which we observe and the object, as though it were, of our observation we call the world.  This is absurd because the world is as little as we are.

And yet the language has its declensions and its conjugations.  If we speak at all we speak in the structure of the language and what we say, whatever it is, may matter far less than our accession to the way the structure of the language divides experience in terms of person and tense so as to say we are (or were, will be), so as to say what was or could, what is, who is the first or second or third person, what is singular or plural, that there are or could have been, that there still might be, certain actions, certain reactions.  We speak in tongues however prosaic our speech may be.  The boldness of language supervenes our actual experience.  It means to say what we don’t know.  It creates the world as if the world were.  Its whole necessity is metaphor.

And language need not be verbal; that is to say our postures and houses, our laws and landscapes, our science and public buildings, share the character of language.  They are metaphor also: creations of desire.

Forgive the world, however terrible it is.  We dream of horror, impelled by what we don’t know, and the world seems to contain it; but it is not a real world and nothing requires our belief.

That we believe in nothing is a hard requirement because we want to believe in something: some political theorem, say, or religious creed or, sparing these, some unevaluated strength of our own as though in our person we might prevail and that prevalence had the salience of some proof.  For what?  For our dying?  Because we do.  Unable to think of ourselves this way, think instead of someone ten thousand years from us one way or another who will have or had a name, a place and costume no more and as much as we have.  And who is he?  Even so far as we know, it is a pretense of knowing.  Abandon that.

We know nothing of the world and will never know.  All we say is metaphor which asserts at once our unknowing and our need to state in some language what we don’t know.  How we love clothes; plain clothing or even our nakedness, speaking the silence of the world, or fanciful costume in which we praise some aspect of the world we mean to praise.  Clothing as metaphor, not to dress ourselves nor to say what the world is if we knew but to praise that world however it might be.  Rich fabrics and fine leathers, ruffles and satin, silver and lace, glorious colors and the fragile purities of clean whites: none of these is the world nor are they all together the world.  Songs only that sing its praise, the earnest entreaties and importunities of our desire.

from Vectors and Smoothable Curves 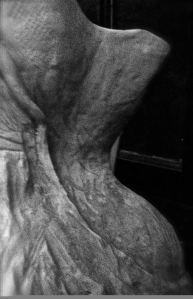 4 thoughts on “Clothing – an ultimate ekphrasis?”