It promises to be a very good day! 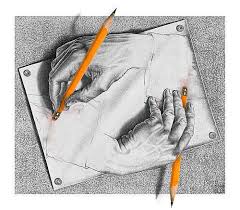 It will have to be something new, you think to yourself, beginning.  What’s been done before is already present.  All the brief and poignant things gathered.  Already processed and past-eurized.

Heroes are made, families described.  Every aberration.  Otherwise we wouldn’t know, would we?  So much sex and images, and the inner lives of children.  Histories and sciences, and the nothing that affords, beyond.

New probably just means different, you say, using old words already.  If it’s a word it’s definitely been done.  Or an action.  Dreams and thinking too.  Which leaves you with little, if not naught.

You once composed a text of tinntinnabuli – it was fascinating to you.  Also a fugue of sorts, even a classical symphony, all in words, one in the twelve-tone scale.  Little matter with a missing orchestra.  Fit snugly into your drawers.

The series of anthropomorphic fruit.  What they felt and how they perceived, from rind to seed.  Even the veins in their fleshes, bruises, and each distinct and delicious juice.  Cycles of life, inevitability of change, sprout to rot.

Yet it’s what you do.  Identify moments and make them stories to exist.  Wrapped in the tangles of problems, sentence-wriggle-thread your way elsewhere.  A place that looks like knowledge.  And sometimes feels.

Like mathematicians with their unknown variables – it’s the ocean you swim, an amoeba almost.

You sought after mastery but found it banal.  Meaning didn’t make any sense.  You turned to hypotheses, but not the wilder the better.  You had to squeeze through gaps, hoping for openings.  A friend called it spelunking, and it did seem dank and cold and blind.  Often.

Restatement is not what you’re after.  Nor refining.  If thinking is digestion, you order an autopsy and strange foreign parts.  Intake as transplant.

Distinctive takes a while, but quickly regurgitates style, and you’re back to remarking, remembering…remorse.

Today you’re dissecting an Else.  Not again, or if\then, or more, but the Else.  What else? you say.  You don’t know.  But it lies here dismembered, deconstructed on your desk.  It’s pretty messy.  The pieces aren’t going to fit, even though you’ve studied jigsaws and puzzles.  Inventing new ones feels like metaphor or code, a twiddling thumb to decipher, something no one has time for even if they wish they did.

It will have to be something new to count as satisfaction, you consider.  And you take up the large eraser.