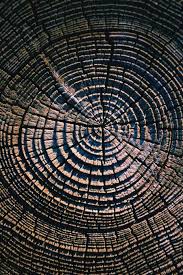 and the typewritten text:

In Which the Wood is Entered, Entering

As we grew we noticed things.  The more we interacted in the woods, the more we found in common.  Or perhaps the woods created them – our commons.  In any case, as we examined the woods we came to see ourselves, or began to think we did.  It appeared to us that very little passed us by without record.  Hewing through a heavy trunk we remembered an ancient drastic storm, here marked as darkened whorls, ripples in an inner ring, where many limbs were lost.  Currents of nourishment functioned over years and years, flowing from the core in hairline strands, outlasting generations of leaving.  At times there were traces of trauma strong enough to redirect the growth entire.  Yet nothing was not useful, productive of something in its life.

Environmental fluctuation sometimes twisted us, never to grow “straight.”  Sometimes the changes came from inside – the patterns of our roots, or pockets of dis-ease, a particular yearning for warmth or rain.  We accumulated, and let go.  There were portions of the wood which had been razed or burned, only to spawn shade for mushrooms and ferns in some other direction.  Often the old laid down to serve as hosts – life drawing life as it waned.  We almost recognized a cycle.  We seemed to grow in all directions at once, to haphazard effect.  We found dead spaces and hollows, troubles to be grown around.  In fact some things were incorporated entire, as if a self-devouring, like a snake would swallow its tail if it could, all the while producing another layer.

We came to view the wood with mystery, ourselves.  Through injury, joy and terror we believed our bodies re-stored it.  Swallowing pockets, harboring knots, runneling roots across ages.  We seeped or scabbed where we were cut, at times remaining open and leaking a kind of syrup or salve, at times hardening over in projects of defense.  We began to be known as “the woodsmen,” and, later, The People of the Wood.

We were tuned to the life of the tree, which we revered as The Tree of Life. 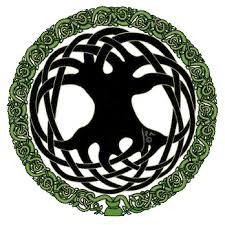