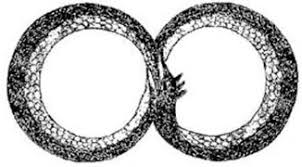 The urgency, that is, the urging I feel in setting forth to compose, is dismantling.

In other words, the forcings that encroach, impinge and unleash within me when I’m ‘of a mind’ (experiencing the intention of) ‘to create’ is one of destruction, a defensive attack.

I am thus synonymed by sculptor, woodcarver, archaeologist.

One wants to undo the stories before they reach the page.

In order to find, discover, the figure of them, a more lasting (perhaps) form or shape.

To strip them of their ‘qualities’ or ‘style.’  Their manipulations.  Creation as a straining of the weak, the falsifiable…a process in survival of the fittest, the more “true”(?) or apt.

The impetus of writing evokes the motivation of doubt, the landscape is struggle.

“To be inspired” might mean to be activated by an experience accurately called “perfink” (David Krech), or, “perceiving, feeling and thinking at once” (Jerome Bruner).

Regurgitant feeling: investigation, analysis, interpretation – meanings attacking meanings, in hopes.  In hopes that a perfink of “meaning” (a satiation of anxiety, terror, doubt) might prove indestructible – as a possibility.

The narrative, then (the verbal expression of a perfink), is a traffic jam of conventions, presuppositions, reality-views and solipsistic Gnosticism forged within the forging self; writing – as apparatus, activity, function – reflexes: brings self-world to bear on self-worlds in attempts to deconstruct automatic (as it were) constructions of perceiving/feeling/thinking – fighting, clawing, tearing against it with the information and energy of shared resources: language, “knowledge,” the usable past.

Clashings of systems, perfinking perfinks, violent internal skirmishes and acts of terror(ism) – a doing that attempts the undoings of doings – an otherwise endlessly insular, of unverifiable and infinite traces, activity known as self-reflexive –

offering only extrinsic chances for momentary cease-fires – the artifact, figure, form of the battlefield, photographed in process and thus submitted – to critics, to readers, to colleagues, to shadows (i.e. to genuine Others) that it might become real (exist in relation, to be directly experienced), corroborated or dismissed by equally limited and idiosyncratic perfinking, outside – both in the world, and of it.

“the contest any artist has with his or her art: working toward a perception that is his or her mind’s peace.”

“the mind carries an austere

inwardness that will not put out its eyes”

“Writing is a lonely business’ is both a dull myth and a material fact of the profession, one I happen to be temperamentally suited to endure but which doesn’t gratify my sense of what it’s for.”

10 thoughts on “Aspects of Writing: Writing the Impetus. The Self-Reflexive.”