This post is an attempt at exploring and hopefully explicating (at least a little) a dialogue that began in a series of comments between the excellent thinker/writer Tocksin and myself.  The comment thread can be read in full here (if you wish), but I will highlight two sections for purposes of this post:

tocksin says: I am noticing we two like to wax philosophical at the expense of letting our characters speak. We are mere babes in the woods being raised by wolves. Tooth and nail we will fight to have our day. Write we must.

N Filbert says: I find that to be true – what you say about being babes in the woods. Wrestling with everything else inhabiting our medium.

tocksin says: Let me feel you more with what you mean by wrestling with everything else inhabiting our medium.

At which point I made some bumbling effort toward it, seemingly tangling into more confusion.  And was set thinking – how would I verbalize what I mean by the wrestling that using language is?  The next two (or more) posts will be my preliminary attempt to language into it.

I interpreted Tocksin’s first message (above) to concern our propensity as writers to be unable to “leave ourselves out of it” (e.g. to let plot and characters, narrative and action be), rather than to voice-in, reflect, trouble and scrutinize our place in the mix of it, the ourness in the howness of any languagings aboutness.  “Tooth and nail we will fight to have our day.  Write we must.”

All of this started rattling about in my old noggin with what darts around in there from Wittgenstein, William James, Gertrude Stein, Bakhtin, M.A.K. Halliday, J.R. Firth, Benjamin Whorf, C.S. Peirce, Edward Sapir, Peter Berger, and thousands of other voices and ideas regarding LANGUAGE, THOUGHT, BEING, PERCEPTION, etc…

As far as I can tell, these relations have concerned humans since humans have experienced concern.  Who are we?  What are we?  How are we?  When are we?  even from time to time expeditioning toward Why?

A few posts ago I quoted Judith Butler from her Excitable Speech to the tune of:

“language is not a tool that merely allows meaning to happen.  Rather, the relation between language and its users represents a complex ‘matrix of intelligibility’ that makes us readable to one another.  Language, in other words, represents a framework that constitutes both the ‘doing’ and the ‘doer’ alike: the subject always exists in a condition of relation to language that implicates the person using it, as much as the addressee – ‘we do things with language…produce effects with language, and…do things to language’ because ‘language is the thing that we do.’ (from Christina Milletti).

Much greater minds than mine have attempted to tackle this – in language, with language, to language, as well as in painting and music, film and image and architecture and dance: Who are we?  What are we?  How are we?  When?  What is?  Happening?  Basic problems of being as faced by our particular type of organism’s means of awareness: senses, perceptive apparatus, and largish brain – all inputting and outputting, inter- intra- extra- extro-putting simultaneously.

Due to our conditions, one of the stickiest problems seems insurmountable – the ability to experience (consciously) BEING.  Or NOW.  The Present.  IS-ness.

In our splendiferous operations of surviving/existing, the mechanisms and processes of doing so (predictive, inductive, deductive, collaborative, receptive, perceptive, oscillatory, responsive, reactive, self-generated, externally infringed, incited, and so on – AMAZING processes!) TAKE TIME, if only nanoseconds…all to say that our perception and/or sensation of being and existing NECESSARILY are not simultaneous to its occurrence, and yet also ARE, because the organizing and perceiving of our activity also constitutes our experiences AS they occur.

This is one of the reasons William James insists on the metaphor of “stream” for our being.

“introspecting the contents of that stream, more precisely, a particular item floating along it, interrupts the streaming, arrests the item (or objectifies), detaches and isolates it.  Let anyone try to cut a thought across in the middle and get a look at its section, and he will see how difficult the introspective observation of the transitive tracts is…As a snow-flake crystal caught in the warm hand is no longer a crystal but a drop, so, instead of catching the feeling of relation moving to its term, we find we have caught some substantive thing, usually the last word we were pronouncing, statically taken, and with its function, tendency, and particular meaning in the sentence quite evaporated.  The attempt at introspective analysis in these cases is in fact like seizing a spinning top to catch its motion, or trying to turn up the gas quickly enough to see how the darkness looks.”

As I am considering language, that is – assigning description, value, reality using symbol/sign/or index to something in human experiences – I am presenting a coming-to-terms (languaging) for myself of what I attempted (languaging) to “mean” (communicate, share, RELATE) in my off-handed comment to Tocksin regarding “wrestling with everything inhabiting our medium,” as well as an hypothesis that has been haunting me since.

“Wrestling with our medium/habitat – language” means for me in this way: As I conceive (language) the being or existence of the human organism, I interpret an organism of proactive and retroactive complex processes organizing and imputing value to its environment, selectively perceiving and constructing a context or situation in which it can get what it needs to survive.  In the scheme of things (or, its organismal specificities IN RELATION TO other organisms and contexts) the human has developed metaphoric and metonymic signification capacities for purposes of more efficient and productive navigation / survival.

Language, (or humans as semiotic beings) then is a medium in the sense of a manipulator of gaps, or a “thing” insofar as it operates between, RELATIONALLY.  Signs are always IN RELATION TO.  Inner experience, outer experience, communication, description, definition, etc…a SHARED HABITAT, an activity, indeed a primary thinking process – signing experience is a composition, exploration, examination and organizing (improvisational and purposive) of our world and our perceptual relations within experience of it.

Signing – languaging world – is for us our activity of finding out, making sense, interpreting, composing and exploring being/existing.

So when we go with purpose to the page to write language – all of this is inherent to the medium – we make our world (as we experience it) inhabit language so that we can experience it and also we inhabit language in order to experience (perceive our perceiving, become conscious of our awareness).  Language is the “stuff”(?) – the medium – the lubricant of passage between ourselves and our senses and perceptions; and everything beyond those individual sensings and perceptions.  Thinking organizes and determines experience.

So self-consciously involving ourselves in language opens up all our experience (known and unknown, much like dreams) to be wrestled with in attempting to make a poem, a story, a report, or a conversation, or, even, a thought.

That is part of what I was trying to say, Tocksin.  Part two will be the idea that has haunted me since… 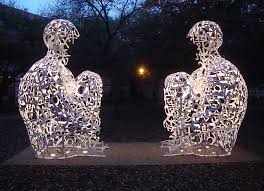 Lyn Hejinian, The Language of Inquiry.  U. of California Press, 2000.

7 thoughts on “RE-GIFTING PRESENTS, part 1: Inhabiting the Medium We Inhabit”