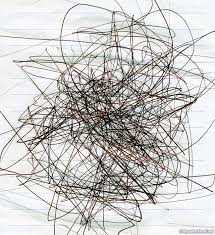 I think many people sense a difference between typing, printing, and writing.  But very few, I surmise, might be able to speak clearly about what those differences are.  There’s the kinesthetic difference, the disjunction of flow between thought forming through the body into theories of letters on paper.  There’s a temporal difference, between the stenography of lightning-thought tapped like Morse code onto a keyboard, versus the individuated pacing of each writers body, hand, and facility of digits.  Some may even say there’s a personality difference between interpreting standardized typography as a communication, and the erratics and imperfections of the same terms from a writing hand.

My desk is dominated by books with titles like Chaos, Incompleteness, Complexity, Information, Emergence, Touch, Telling, Lines and Erasure.  Aspects of being human that glance across gaps or dawdle on edges – where knowledge isn’t comprehensive (and where might it be?) – are the processes and activities that fascinate my fancy.

Coupling an article I chanced upon (thank you Scholarly Kitchen) about Technology and Cursive Writing, with my current readings in Tim Ingold’s Lines: A brief history, I begin to slowly realize that how we interact with lines, with writing, is sourced far beyond and beneath our immediate experience.

Ingold begins with the consideration of what we understand by the words “song” and “music.”  How “music has become wordless; language has been silenced.”  In the past music referred to sonorous words set to harmony and rhythm, sounds alone were an embellishment to language, but not the principle purpose.  Language was the sound-filled reality, like animal chirps or barks, the human’s vocal verbality.  With inscription, language began to silence.  Sound encountered a gap with meaning, or took on meaning of a different kind.

Similar worldview realities are exhibited in ways of inscribing.  “In typing and printing, the intimate link between the manual gesture and the inscriptive trace is broken.  The author conveys feeling by his choice of words, not by the expressiveness of his lines.”  And writing experienced gaps in relation to drawing, language further abstracted.

“Yet whether encountered as a woven thread or as a written trace, the line is still perceived as one of movement and growth.  How come, then, that so many of the lines we come up against today seem so static?  Why does the very mention of the word ‘line’ or ‘linearity’, for so many contemporary thinkers conjure up an image of the alleged narrow-mindedness and sterility, as well as the single-track logic, of modern analytic thought?”

“It seems that what modern thought has done to place – fixing it to spatial locations – it has also done to people, wrapping their lives into temporal moments…If we were but to reverse this procedure, and to imagine life itself not as a fan of dotted lines – but as a manifold woven from the countless threads spun by beings of all sorts, both human and non-human, as they find their ways through the tangle of relationships in which they are enmeshed, then our entire understanding of evolution would be irrevocably altered…It would lead us to an open-ended view of the evolutionary process, and of our own history within that process, as one in which inhabitants, through their own activities, continually forge the conditions for their own and each other’s lives.  Indeed, lines have the power to change the world!”  (Ingold)

Bringing it back to the inscription of language, it is easy to see the bias of expression in the meaning of signs – but that meaning abstracted into disconnected idea-banks of terms, rather than the entire gesture of activity of inscribing.  My talent diminishing to equational finesse – the fiddling and play or arrangement of alphabets like numbers – rather than a being expressing its thought through gesture and individuated agreed-upon symbols and signs.  Perhaps our sense of difference betwixt the typescript and handwritten is that there is a little less of ourselves as individuated organism, and a lot more of standardized general practices and beliefs.  Perhaps we feel a little less in- when our scripts are preformed?  I do not know, I am foraging the questions…

9 thoughts on “a tidbit on writing”