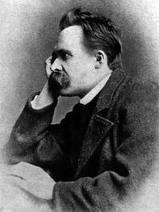 “Nietzsche is the most sarcastic son of a bitch ever to set foot on this
earth. Just say that; then write whatever else you want, like he would.” —
— So my friend Werner Timmermann tells me, with a gleam in his eye.
He helped with my translation of Thus Spake Zarathustra, a four-year-long
labor of love, so he knows what he is talking about. Zarathustra (1885)
was Nietzsche’s magnum opus; everything before it was preparation,
everything after it expatiation and elucidation.
But, for some, the question remains: Why Nietzsche? Friedrich
Nietzsche (1844-1900) was quite simply one of the most original and
influential philosophers who ever lived; in addition, his writing style was
brilliant, epigrammatic, idiosyncratic [“It is my ambition to say in ten
sentences what everyone else says in a book — what everyone else does
not say in a book.”] The language dances, prances, whirls and twirls; it
ranges from ghetto-verbalizations and vulgarizations to high art, from
lyricism to sardonicism, from satyr-play to passion play. No one really
writes like Nietzsche, though the number of his stylistic apes and
imitators is legion (especially in the ranks of academe).

-from the introduction 2004 translation of Ecce Homo & The Antichrist