The praxis of empty signifiers : words : full of sound and fury.

If you accept the ‘I’, or find a name to call yourself – like using a credit card received in the mail (illusion of invisible funds), what do you charge to it, and does it always end in debt?

Does it make of you a consumer to believe the ‘I’?  To use self-reference as a token or coin?

How soon do “my” and “mine” follow after, even though each object, event, or transaction, is clearly only a loan?

What is charged to the ‘I’ must be paid back – to put it in legal or religious terms.

Be careful what you say.

Wittgenstein claimed that we mostly speak without giving full meaning to the terms we use – that we ought remain silent whereof we cannot speak with adequate comprehension.  Where we sing beyond our knowing –

very few (if any) utterances comply.

But how learn anything (even the untrue) without not-knowing?  Without composing walls to break apart or knock upon, to breach or to climb?  Without making it up to unlearn and repent of?

It’s happening as I write or think or imagine this.  As if.

As if it signified something.  I write with sound and fury.  Into silence.

I seem to know I’m alive by touching, tasting, smelling, hearing, seeing – things other… feeling, sensing, perceiving… crafting empty signifiers like nostrils, like a tongue, a kind of eyesight and ear, my fingertips.  My flesh on loan.  To be paid back.

If I am given the sound of leaves as they crisp and color the Autumn breeze, refracturing light; if I can smell the moisting decay (debts repaid by undoing what was charged), if I can gather them with my hands and roil about them with my body, if I can bake the seeds and chew, take them in…

You sentence me: two I’s.  I hear your melodious song.  You whisper, close.

I say ‘I love.’  Terms lacking comprehension.  Metaphysics.  Their meanings beyond knowing.  Unlearned.  “We” are (whereof we cannot speak).

Swiping our cards for contents.

What do we owe?

What do we know?

Each their own set limits.  Sometimes raised, sometimes lowered, depending on our fidelity to pay with interest.

Even for our silence.

Even cash-only – that empty signifier – words.  Even simply action.  ‘I move’ – is a statement on credit, like breath.

Imagine what it means.  To owe.

Again I break the silence of what I do not know via signs of repentance.  These words.

All the silence they require.

with all that has room in it,

Someone asking: what is gesture?  movement?  expression-in-its-being?

Someone mentions music, which it claims “represents nothing at all,” (Michel Seuphor) and I doubt that: is there not expression?  confession?  some sonorous and vibratory friction or exhalation?  A “constant inscription of birth in innumerable ways…language is metaphor and metonymy, one cannot avoid it.”  (Helene Cixous)

I am tracing letters without a model, refusing to hub any wheel…

Out of its mouth: communication sounds.  The body moved likewise.  Undulant, suggesting.  only sounds, no discernible words.

Andre Malraux: “You are human when you can say no.”  Remembers Bartleby.

What is called ‘agency’?  Only negation?

This is how the story goes?

And when is the “system of nonknowledge” (and unknowing) not “unfinished” (Bataille) posthumous.  Post-humorous.  Generations.

“all that has room in it”

Of truth and genesis – constant inscriptions of birth.  Unthinking the point and the line.

This is the shaping of chaos, this hell of stories.

Unbearable lightness of being, this breath or stream of life.

Mismaking is an art (or so we hope, we think, desire, demand).

[everything I letter down is plagiarism]

These – the margins of philosophy, a way of life.

Saying I no more.  Interior distance.

This is the writing of disaster: the book-that-turns-to-water.

Text (from textare: to weave).

My notes in the fog.

The trouble with pleasure. 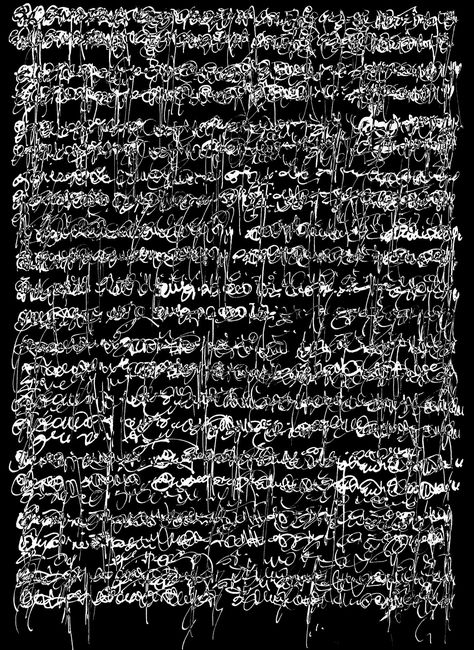 “language cannot cope with its relation with the world”

Sometimes it seems that words might do anything!  Connecting things and people; defining, describing, explaining and exclaiming; naming, inventing, questioning… arguing, fomenting, discovering; seducing, displacing, and singing.  Very little experiencing of the human kind comes unaccompanied by terms.  – Is that so?

There are dreams – like signs and billboards of liqueous or exaggerated perceivings… “the sign – is the quietest razor of darkness” (A. Dragomoshchenko)… and slit it does.  We bleed.

And breathing, heart’s-pulse, sleeping along with the intake of food, its output as waste, our birthing and walking, working and running… and dying.  All our play.  Intercourse, of course.  Do moans and groans, grunts and cries and sighs, lisps and complaints (our myriad utterances) – mean words?  mean language?  What of our relative silence?  The thrumming body of the speechless and deaf?  Eye-gaze dumb, its blindness?

The skin has been rubbed off my fingers.

Wordlessly, soundlessly, lust and desire screech on…shrill in body and bone – both where the starving exudes and toward its petulant prey.

What of the growth of grasses?  Is language there?  In rhythmic patterning of rain?  A sense of sunlight?

And a “sign – is the quietest razor of darkness” – darkness visible, darkness speaks – (it has been claimed – via words, the verbal).

Sweet and troubling confluence: activity and languaging (the same): the “verbal.”  Of sound and motion.  Our noise.  Moving sound around in and with our bodies – in speech or dance, in strain and the clamor of being.

What falls (or grows, blooms, disappears) outside the devouring knife – that which segments and shrivels the fluid songs of experience and reverie?  Of presence.  The Slicer-Dicer we’ve composed, posing together to cut from faultless fabric?

As utterance, inscription fondles its way, brushingly and blade-like, sensually surreptitious.  Caressing and crafty, rapaciously blessing its praying and braying of names – who can counter its reduction, repression, its blame or silvery shame?

As if genesis were language and time: space to create with.

What is called “molecules”?

a fog and a swarm of birds,

a thing humans are prone to

who or what evaluates “nature”?

The world overgrown.  At least any accessible sector.  I’ve heard tale of open, of empty, of spacious, of dearth.  Not where I approach.  Even my own body – its in- or out-sides, its wherewithal.  Always where-with-all.

Tangled, almost briny, in some instances.  If able to determine a surround wherewith or whenwith to take a stance in.  Even thinking, even breath, even a pulse of bloodbeat.  Any sound we form toward music.  Any making-sensible.  For us.  Our kind.  Those within the overgrown – the untamable, reckless warp and weft.

To hunch there, immediately becomes here.  How different – if imagined?  To gather, to pre-tend.  To suppose a disposition, a presence somehow differentiated.  How-some?  To curl in, therefore (perchance? per theory?) “to find,” to be able to, to call, to be-in-g?  Yet how?  Or why?  Where is the for?  And what might the hole be suspected to fill?

Where is the gap between this and the other?  Between you and me, he or she, this-that-the-other, between…any/thing?  Something wishes to know, apparently… and this wishing/motion/decision/desire/activity/drive (whatever “  “) begins by implicating violence… bi-lining a world with borders, invented barriers, perceived traces, intuited splits, cuts and hacks that are not there until.  How un-till this supposed “soil” from which to distinguish, fabricate, or function?  From which to “operate.”  Surgeon-species.

What knowledge is expected by destroying?  Deconstructing (or constructing) – both requiring joints?  By suture and slice?  By taking life?  Prone to decompose.  What a trajectory.

To try to body.  To try to mind.  Attend.  Acknowledge.  Distortion.  To twist and torture an other, as the one or…alteration.  De-pict.

Impossible connection already seems to be.  Each, every add-ition a disconnecting, a cutting, a stitching seam according to a pattern.  Whose?  Whats?

Over, under, whelmed.  Where is the open, the undifferentiated, the is?  Always already be-fore.  All ways, all ready, be-for.  In other words…not possibly worded.  Prior to word.  Involving act (including language) but unincorporated (already corporal), defying design-ation (surprisingly? one would think ‘it’ [not] is at the end of de- or un-signing/signifying), erasure of description, all palimpsests equaling… perhaps (per-happening) – infinite, certainly uncountable, incalculable, without ordination, order, ordaining, without with-in or –out.  Only WITH, inconceivable, imperceptible (perception cuts), irretrievable (the rejection of any re-), disabused, disturbed perturb, a dreaming dreamed turbulence = a happen to be.

Still this thinks with.  Language.  Lost already, displaced and falsified by a tiny thread, an whole fabric, a world-veil at least whilst continuing as world…

Think again.  Dream.  Confuse.  Imagine.  Invent.  Art ducts (vents) for breath… further re-moves, com-pli-cations, furthering within, for fun?  A dance, a play, a re-morse (cryptic codification, surreptitious and additional) some native complicity to immeasurable complexity.  As is.  As if.  And so on…

HE in the feeling of HER approach.  That syrupy abyss.  Unknowing.  Every anticipation and guess.

What other flesh is.

Any time you are enabled

We could imagine IT as HIM wanting.  Awaiting.

But there is no resemblance to wait for.

Only HER, the delicious, dilemma, unknown.

Loss of memory.  Hope of presence.

– the surprising rarety of ‘being-out-of’…

In the center a shrine a temple.  And no center exists, except by imagining, by metaphor, metonymy.  Delusional illusion of some living cartography.

Each pressing and critical, earnest, persistent scenario and situation –

It’s always coming.  In.  The status and singling.  Ever singing.

What might have been experienced as “LONGING” – that which is extended, strained toward…

SHE… a recoiling, a reconnaissance, some new emission.

HE laughs, as if capitulating, a surrender, a stab, asunder.

In other words, too many… uncountable stories (may) have begun (begin)…