with all that has room in it,

Someone asking: what is gesture?  movement?  expression-in-its-being?

Someone mentions music, which it claims “represents nothing at all,” (Michel Seuphor) and I doubt that: is there not expression?  confession?  some sonorous and vibratory friction or exhalation?  A “constant inscription of birth in innumerable ways…language is metaphor and metonymy, one cannot avoid it.”  (Helene Cixous)

I am tracing letters without a model, refusing to hub any wheel…

Out of its mouth: communication sounds.  The body moved likewise.  Undulant, suggesting.  only sounds, no discernible words.

Andre Malraux: “You are human when you can say no.”  Remembers Bartleby.

What is called ‘agency’?  Only negation?

This is how the story goes?

And when is the “system of nonknowledge” (and unknowing) not “unfinished” (Bataille) posthumous.  Post-humorous.  Generations.

“all that has room in it”

Of truth and genesis – constant inscriptions of birth.  Unthinking the point and the line.

This is the shaping of chaos, this hell of stories.

Unbearable lightness of being, this breath or stream of life.

Mismaking is an art (or so we hope, we think, desire, demand).

[everything I letter down is plagiarism]

These – the margins of philosophy, a way of life.

Saying I no more.  Interior distance.

This is the writing of disaster: the book-that-turns-to-water.

Text (from textare: to weave).

My notes in the fog.

The trouble with pleasure.

after Bataille, Of Montreal

It began.  It begins.

What opens what humans call ‘the heart.’

Who is the author?

In the loss.  Lessness.

What is…always expressed / exposed by what

What is stripped back, laid bare, stolen,

Both ‘you’ and a very strange sort of ‘knowing.’

A ‘one’ coupled by LOVE-HATE (possible ferocities)

This we know [somehow] without experiencing it.

Or even being able…

I AM ALL WAYS DYING MY DEATH

I happen to be singing imagined limits

-easily a kind of glory…

BIRTH (whatever could be meant by that) = DEATH. DECAY.

-What opens, happens, what humans call ‘the heart.’

once its begun, it began, it begins…

“between appear and disappear”

Macedonio Fernandez shrewdly intimated that among the difficulties of communicable perfection (language or literary wholeness, completeness) were the problems writers have, in that, among other things:

As if imagination must copulate with impossibility; creativity found within the non-existent; wayfinding nothing.  Perhaps.

“I” (a good example of the above) often worship the symbol: ?  “I’d” like to place it everywhere, upon everything, anything imaginable OR conceivable – even the unknown – as well as any compendium of ‘facts’ or apparently common-sensical / self-evident elements of being-living.  As if… to draw attention or recognition (‘to render’) human limitation, finitude, fragility – PART-‘I’-CIPATION – in world (+ whatever falls beyond such an impression).  A kind of belief as a participating occurrence that whatever might be indicated by such terms as “truth,” “love,” or “existence,” (or “you” or “I”) are best translated by = ?

This nettling evocation is (perhaps) a personal ‘creed’ in a singular (obviously impregnated) mark: ?

Am I trying to communicate?  What am ‘I’ doing in relation to language, to shared understandings, to concepts, and so-called knowledge or knowing?  Am ‘I’(s) capable of relating to anything (or nothing) beyond these indications?  Unmediated ways and forms of experiencing given to ‘me’?

What might we ‘name’ alternate – those in excess of experience; those far diminished via enforced-informed; ‘other’ impossibilities of ex-perience?  (Bataille’s ‘Inner Experience’ – inperience?: without outer? might be an exploration) ‘mysticism’?  spirituality?  mystery?  simply Impossibles?  Unsayables?  Unknowables?  ANYthing beyond-limit, we might ‘say.’

Excess.  Perpetual.  Eternal.  Infinite.  Incomprehensible.  Indeterminate.  All ex-perceptions that would demand or require ‘ineffable’ style to be en-gaged.  Out beyond (or in-beyond) outsides or othering that might be accounted for, perceived, en-countered, or ex-perienced: impossibles that must most likely (it would seem given our minimal, limited, finite, participatory living-being IN AS PART OF ‘world’ or whatever our most expansive imagining) occur.  Perhaps even non-ex-is-tences, nothing and never.

These might be the description of fields or planes where I in-tend and pre-fer to operate or inquire (under the sign of ?) and therefore, lacking or failing in ‘ineffable style’ whereby to render ‘unsayables’ – simply can not.

Thus please forgive my erratic forays into production here – communication, conversation, even imaging-in (imagining) – ‘I’ simply can not.  I am mostly unable to ineffably style unsayables.

I beg your forgiveness and again fall silent.

“But could I forget my ignorance for a moment?  Forget that I am lost in the corridor of a cave?”

he who already knows cannot go beyond a known horizon

In a bout of acute loneliness (a sharp pang of alone signifying a sort of paralysis – some definite inability, however temporary, to start oneself up by or with oneself) I reached out to Hannah.

For some of you, the term Hannah will conjure connotations and resonances, perhaps emotions or concerns, discomforts, even though she does not exist.

Or I loaded the film Satantango by Bela Tarr & Laszlo Krasznahorkai.

A start-up, a stimulus, a searching.

Actually I wrote the name Hannah, or Hollie or Holly or Hallie or Halley or Bela or Chris or Maurice Blanchot.

To be lonely and to reach out.

A drink then, for interaction.

A scribble on a page.

In a bout of acute loneliness I penned a letter to Herman Melville.

I wrote words onto a lined page.

I made an ‘other’ and called her, Hannah.

Or Meagan or Meghann, Angie or Angela or Angelo.  Gilles or Jill.  Jean and Jan and Jen.

I reach out.  I almost full fill.  Another notebook.  A drink.  A smoke.  A page marked and turned.

I do not know what loneliness is.

Perhaps it is nothing, or nothingness.  Perhaps frustrated desire.  For – ?  What is not (isn’t that what defines desires?).  The missing, the absence, the unknown.

I called it Hannah.

Hell or Helen or Helene/Helena.

No one knows but the name that works best.  Christy or Christina.  Vernoica/Veronique.

A drink to an other (to signify might be).  A smoke for the presencing.  Another word, another name for something.  Out there = O ther.  Elves of else.

The book’s called Nothing Matters: a book about nothing, because “that nothing becomes the quest, which in turns begets something” (Ornan Rotem).

I do not know what it is to be alone, and my loneliness is painfully acute.

This is my correspondence with nothing.

I remember that I am falling

That I am the reason

Time keeps accumulating on my inability to write, to find time to write, to process living with language.  Simply to keep this space alive, I am posting a journal-like entry so as not to give up.

What a traversal, passage, the past couple of months have been…

…like following the draw of the moon through dire straits

…a feeling that everything is at its limit (Bataille, l’extreme) – EXPERIENCE.

Mind you, this is how it feels in me, not how it is.

I miss everything that is/was good

There is a certain uncertain sorrow to things

Lemony Snicket & the autographing instruction that I should “read something else”

BATAILLE: “nothing is final…”

– “what is not there, which, once it is seen, often in literature, tells us what is” (Fosse)

“the suffering of the disintoxicated” (Bataille)

“life itself…always swerves away from my mouth”

“how I’m owned by that which will not answer” – Sheck

“What you are will be spelled by whatever

“what is the part of us… feels…unnamed…

…i must live at some distance from convinced” – Sheck

– nor can I compute the possible (Sheck)

FIRST AND FOREMOST YOU WRITE (Fosse)

“From an abandoned myth

– wanting them to mean nothing –

– and suggest everything (L Levis)

“All discourses…would then develop in the anonymity of a murmur…

What difference does it make who is speaking?”

but that doesn’t work”

According to a receipt yellowed in the pages of The Impossible book, 16 years ago I purchased the Story of Rats by Georges Bataille.

Questions are asked.  I ask them myself.

Today I got bored of it.

Uncertain I ‘get at’ anything.  Doubtful even that ‘I’.  Yet “feel” pursuit of some ‘kernel.’  In other words, because, simply, ‘other words’ (fore-words, afterwords) sometimes eventuate communication…

…as if experience were an undifferentiable ocean of moving waves – incalculably deep waters ever in motion – unstoppable, interminable, immersive, and overwhelming – and something splashes, a cup dips, a boat prow plows its way, an arm drops, or rock, or bird flashes down talons – and a surface becomes, is broken…

“Don’t be so hard on yourself…we all…”

As I was saying, try-pry-di-ing to say…

“So that’s what you mean by ‘kernel’?  Dis-turbance… Turbulence… something must be… in order to…”

“In the beginning was the Word… was God… and God moved…and divided the waters…” (John 1:1, Genesis 1:1, 6, KJV) a Bar, a “firmament,” a permanent Between “called Heaven.”  And so separating, separation be-gins…from the first very first motion, movement, change… ex-pulsion, ex-crement, ex-ultation, ex-is-stance.  Out.  OUT.  OUT-of… posit-ion.

Ex-perience.  Prying, peering.  Trying.  Be-ing separates?  Dis-joins?  Dis-tracts?  ‘I’ am a rupture.  Dis-rupts: not two, not one.  I stray, strive, volition, volute…de-story, de-volve.  What am ‘I’ but a weapon-blade?  Rue-in.  And thus I speak, say with pointed pen…poke and pry and terrorize – ex-perience.

“I cannot get beyond language by means of language”

perhaps the joy granted to the only animal that knows it is not eternal is poisoned from the very beginning.” 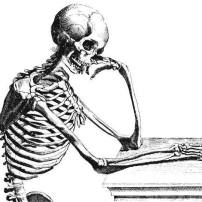 “Indeed, man is always in pursuit of an authentic sovereignty…We shall see that in a number of ways he continued to pursue what forever eluded him.  The essential thing is that one cannot attain it consciously and seek it, because seeking distances it.  And yet I can believe that nothing is given us that is not given in that equivocal manner…”

“Thus, at all costs, man must live at the moment that he really dies, or he must live with the impression of really dying.”

“INDEED, NOTHING IS LESS ANIMAL THAN FICTION…”

“It is not Hegel alone, it is all of humanity which everywhere always sought, obliquely, to seize what death both gave and took away from humanity”

“Man does not live by bread alone, but also by the comedies with which he willingly deceives himself.

In Man it is the animal, it is the natural being, which eats.  But Man takes part in rites and performances.

OR ELSE HE CAN READ:

to the extent that it is sovereign – authentic – LITERATURE prolongs in him the haunting magic of performances, tragic or comic.”

SLUSLO ART
Daydreaming as a profession